You are using an outdated browser. Please upgrade your browser to improve your experience and security.
Alfred North Whitehead
British mathematician and philosopher
Media
Print
Please select which sections you would like to print:
Thank you for your feedback

British mathematician and philosopher
Written By:

Whitehead’s grandfather Thomas Whitehead was a self-made man who started a successful boys’ school known as Chatham House Academy. His father, Alfred Whitehead, an Anglican clergyman, in turn headed the school and later became vicar of St. Peter’s in Thanet. His mother, born Maria Sarah Buckmaster, was the daughter of a prosperous military tailor. Alfred North Whitehead was their youngest child. Because they considered him too frail for school or active sports, his father taught him at home until he was 14, when he was sent to Sherborne School, Dorset, which was then one of the best schools in England. Whitehead received a classical education, showing a special gift for mathematics. Despite his over-protected childhood, he showed himself a natural leader. In his last year at school, he was head prefect, responsible for all discipline outside the classroom, and was a highly successful captain of games.

In 1880 Whitehead entered Trinity College, Cambridge, on a scholarship. He attended only mathematical lectures, and his interests in literature, religion, philosophy, and politics were nourished solely by conversation. It was not until May 1884, however, that he was elected to an elite discussion society known as the Apostles. Whitehead did well in the Mathematical Tripos (honours examination) of 1883–84, won a Trinity fellowship, and was appointed to the mathematical staff of the college. His interest in James Clerk Maxwell’s theory of electricity and magnetism (the subject of his fellowship dissertation) expanded toward a scrutiny of mathematical symbolism and ideas. Stimulated by pioneering works in modern algebra, he envisaged a detailed comparative study of systems of symbolic reasoning allied to ordinary algebra. He did not begin to write his Treatise on Universal Algebra (1898), however, until January 1891, one month after his marriage to Evelyn Willoughby Wade. She had been born in France, a child of impoverished Irish landed gentry, and educated in a convent. She was a woman with a great sense of drama and a real and unusual aesthetic sensibility, and she enriched Whitehead’s life immensely.

Shortly before his marriage, his long-standing interest in religion had taken a new turn. His background had been solidly tied into the Church of England; his father and uncles had been ordained; so had his brother Henry, who would become bishop of Madras (now Chennai), India. But Whitehead, under the influence of John Cardinal Newman, began to consider the tenets of the Roman Catholic Church. For about eight years he read a great deal of theology. Then he sold his theological library and gave up religion. This agnosticism did not survive World War I, but Whitehead was never again a member of any church.

Whitehead was at work on a second volume of his Universal Algebra from 1898 to 1903, when he abandoned it because he was busy on a related, large investigation with Bertrand Russell. He had spotted young Russell’s brilliance when he examined him for entrance scholarships at Trinity College. In 1890 Russell was a freshman studying mathematics there, and Whitehead was one of his teachers. Gradually the two men became close friends. In July 1900 they attended the First International Congress of Philosophy in Paris, where they were impressed by the precision with which the mathematician Giuseppe Peano used symbolic logic (formal logic) to clarify the foundations of arithmetic (see also Peano axioms; foundations of mathematics). Russell at once mastered Peano’s notation and extended his methods. By the end of 1900 he had written the first draft of his brilliant Principles of Mathematics (1903). Whitehead agreed with its main thesis—that all pure mathematics follows from a reformed formal logic so that, of the two, logic is the fundamental discipline. By 1901 Russell had secured Whitehead’s collaboration on the second volume of the Principles, in which this thesis was to be established by strict symbolic reasoning. The task turned out to be enormous. Their work had to be made independent of Russell’s book; they called it Principia Mathematica. The project occupied them until 1910, when the first of its three volumes was published. The “official” text was written in a notation, most of which was either taken from Peano or invented by Whitehead. Broadly speaking, Whitehead left the philosophical problems—notably the devising of a theory of logical types—to Russell; and Russell, who had no teaching duties, actually wrote out most of the book. But the collaboration was thorough, and Russell gave Whitehead an equal share of the credit. Whitehead’s only large published piece employing the symbolism of the Principia is a masterly speculative memoir, “On Mathematical Concepts of the Material World” (1905). 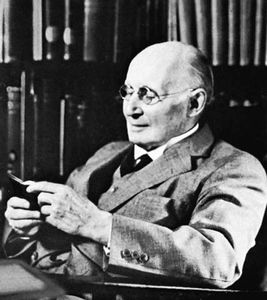