John Philip Kemble, (born Feb. 1, 1757, Prescot, Lancashire, Eng.—died Feb. 26, 1823, Lausanne, Switz.), popular English actor and manager of the Drury Lane and Covent Garden theatres in London, where his reforms improved the status of the theatrical profession. He played heavy dramatic roles in the artificial and statuesque style then in vogue. His most famous roles were Shakespeare’s Brutus in Julius Caesar and the title roles in Hamlet and, above all, Coriolanus. He excelled in declamation but could not express strong or subtle emotions.

Eldest son in an acting family, Kemble spent his childhood on the stage. Later he trained for the priesthood in France, where he acquired a certain severity and asceticism that influenced his acting style. Finding that he had no vocation for the priesthood, he returned to England and the theatre, making his first adult appearance on the stage in 1776. After several years in the provinces, he played Hamlet in Dublin on Nov. 2, 1781, and made his London debut in the same role at Drury Lane on Sept. 30, 1783, with mixed results. It was, however, his performance in Macbeth on March 31, 1785, opposite his sister, the great tragedian Sarah Siddons, that established him as a popular favourite.

Appointed manager of the Drury Lane Theatre in 1788, Kemble made important reforms in costumes, scenery, and management, introducing live animals and aquatic effects to the stage for the first time. As an actor, Kemble’s tall and imposing figure, impressive countenance, and grave and solemn demeanour made him uniquely suited for the Roman characters in Shakespeare’s plays. Because of conflicts with Richard Brinsley Sheridan, a dramatist and the proprietor of Drury Lane, Kemble resigned his position as manager, and though he resumed his duties temporarily at the beginning of the 1800–01 season, the connection between the two was permanently severed at the end of 1802. In 1803 he became manager of the Covent Garden, in which he had acquired a sixth share; when the playhouse burned down on Sept. 20, 1808, he suffered financially. The increase in prices after the opening of the new theatre in 1809 led to riots that practically suspended performances for three months. Kemble was saved from ruin by the sale of his fine library and by a large loan, afterward converted into a gift, from the Duke of Northumberland. Troubled by gout and threatened by the rising popularity of the great Romantic actor Edmund Kean, he retired to the European continent after his last performance as Coriolanus on June 23, 1817. 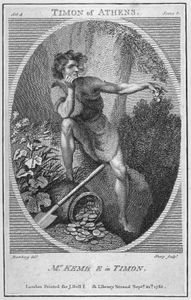