You are using an outdated browser. Please upgrade your browser to improve your experience and security.
Nicolai Hartmann
German philosopher
Media
Print
Thank you for your feedback

In his two-volume Die Philosophie des deutschen Idealismus (1923–29; “The Philosophy of German Idealism”), however, Hartmann showed signs of rejecting Neo-Kantian views. The rejection was completed by his reversal of the Kantian position that mind constructs reality through thought, a position renounced in Neue Wege der Ontologie (1942; New Ways of Ontology). According to his new ontology, epistemology depends on ontology, not the opposite. Thus, the “being” of objects is a necessary prerequisite for thought or knowledge about them. The knowledge that people have of reality is itself a part of reality, as an event among other events.

The basic forms of human thought, which Hartmann called the “subjective categories,” are not to be considered identical with the basic structures of reality, or “objective categories.” Because of the irrational will that clouds mental activity, and because of pure time-and-space limitations, human beings will forever be surrounded by a vast expanse of unobjectifiable being. Consequently, all that scientists or philosophers can hope to achieve is a partial assimilation of their subjective categories to those of the object.

Following Max Scheler, Hartmann considered reality, though orderly and partly rational, to be devoid of meaning, with the result that humanity must perform the heroic feat of living human life in a world entirely alien to human aspirations. 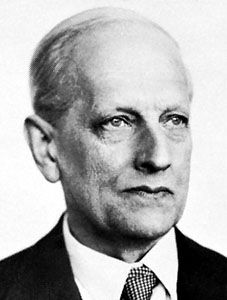