You are using an outdated browser. Please upgrade your browser to improve your experience and security.
{ "112441": { "url": "/event/Chinese-Civil-War", "shareUrl": "http://www.mumt4.com/event/Chinese-Civil-War", "title": "Chinese Civil War", "documentGroup": "TOPIC PAGINATED LARGE" ,"gaExtraDimensions": {"3":"false"} } }
Chinese Civil War
1945–1949
Media
Print
Please select which sections you would like to print:
Thank you for your feedback

Chinese Civil War, (1945–49), military struggle for control of China waged between the Nationalists (Kuomintang) under Chiang Kai-shek and the Communists under Mao Zedong.

During the Second Sino-Japanese War (1937–45), China was effectively divided into three regions—Nationalist China under control of the government, Communist China, and the areas occupied by Japan. Each was essentially pitted against the other two, although Chinese military forces were ostensibly allied under the banner of the United Front. By the time Japan accepted the surrender terms of the Potsdam Declaration on August 14, 1945, China had endured decades of Japanese occupation and eight years of brutal warfare. Millions had perished in combat, and many millions more had died as a result of starvation or disease. The end of World War II did not mark the end of conflict in China, however.

Japan’s defeat set off a race between the Nationalists and Communists to control vital resources and population centres in northern China and Manchuria. Nationalist troops, using transportation facilities of the U.S. military, were able to take over key cities and most railway lines in East and North China. Communist troops occupied much of the hinterland in the north and in Manchuria. The United Front had always been precarious, and it had been tacitly understood by both the Nationalists and Communists that they would cooperate only until Japan had been defeated; until then, neither side could afford to seem to pursue internal aims at the cost of the national struggle. The growing wartime ineffectiveness and corruption of the Nationalists—who seemed, especially to the North Chinese, practically a government-in-exile in far-off Chongqing—left the Communists on a rising tide in 1945.

The stage was set for renewal of the civil war, but it initially appeared that a negotiated settlement between the Nationalists and the Communists might be possible. Even before the Japanese surrender had been finalized, Nationalist leader Chiang Kai-shek had issued a series of invitations to Communist leader Mao Zedong to meet with him in Chongqing to discuss reuniting and rebuilding the country. On August 28, 1945, Mao, accompanied by American ambassador Patrick Hurley, arrived in Chongqing. On October 10, 1945, the two parties announced that they had reached an agreement in principle to work for a united and democratic China. A pair of committees were to be convened to address the military and political issues that had not been resolved by the initial framework agreement, but serious fighting between government and Communist troops erupted before those bodies could meet.

U.S. Pres. Harry S. Truman responded to the outbreak of violence by dispatching George C. Marshall to China in December 1945. The Marshall Mission succeeded in bringing both sides back to the negotiating table, and on January 10, 1946, an armistice was concluded between the government and the Communists. On January 31 the Political Consultative Conference, a body composed of representatives from across the Chinese political spectrum, reached agreements on the following points: reorganization of the government and broadening its representation; convocation of a national assembly on May 5, 1946, to adopt a constitution; principles for political, economic, and social reform; and unification of military command. In late February Marshall brokered an agreement on military force integration and reduction—the Chinese army would consist of 108 divisions (90 government and 18 Communist) under the overall command of a national ministry of defense. Before any of these agreements could be put into practice, renewed fighting broke out in Manchuria. The withdrawal of Soviet occupation troops in March–April 1946 triggered a scramble; Nationalist troops occupied Mukden (Shenyang) on March 12, while the Communists consolidated their hold throughout northern Manchuria. After government troops took Changchun on May 23, a 15-day truce was declared in Manchuria from June 6 to June 22. Fighting intensified elsewhere, however, as government and Communist troops clashed in Jehol (Chengde), northern Kiangsu (Jiangsu), northeastern Hopeh (Hebei), and southeastern Shantung (Shandong).

Marshall and John Leighton Stuart, the newly appointed U.S. ambassador, tried to bring the two sides together in late August to discuss a coalition government, but the effort was fruitless, as neither side wished to give up its military gains. In late September 1946 Nationalist troops laid siege to Kalgan, a major Communist base, and lead Communist negotiator Zhou Enlai responded by withdrawing from peace talks. Kalgan fell to the Nationalists on October 11, and on October 21, Zhou was persuaded to return to the restored Nationalist capital at Nanking (Nanjing) for further negotiations. To induce the Communists and other parties to join the new National Assembly, Chiang issued a qualified cease-fire order on November 11 and postponed the opening of the assembly from November 12 to November 15. On November 20, Zhou flew from Nanking to the Communist stronghold at Yan’an. On December 4 Zhou wired Marshall that “if the Kuomintang would immediately dissolve the illegal National Assembly now in session, and restore the troop positions of January 13 [1946] the negotiations between the two parties may still make a fresh start.”

On December 25, 1946, the National Assembly, without the Communists or the left wing of the centrist Democratic League, adopted a new constitution. Combining features of both presidential and parliamentary systems with Sun Yat-sen’s Five-Power Constitutional democracy, it was to be put into effect on December 25, 1947. Until the new constitution was enacted and a new president elected, the Nationalists would continue to be the ruling party. 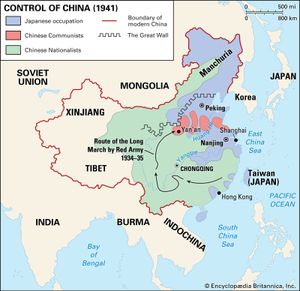