French Revolution, also called Revolution of 1789, revolutionary movement that shook France between 1787 and 1799 and reached its first climax there in 1789—hence the conventional term “Revolution of 1789,” denoting the end of the ancien régime in France and serving also to distinguish that event from the later French revolutions of 1830 and 1848.

Origins of the Revolution

The French Revolution had general causes common to all the revolutions of the West at the end of the 18th century and particular causes that explain why it was by far the most violent and the most universally significant of these revolutions. The first of the general causes was the social structure of the West. The feudal regime had been weakened step-by-step and had already disappeared in parts of Europe. The increasingly numerous and prosperous elite of wealthy commoners—merchants, manufacturers, and professionals, often called the bourgeoisie—aspired to political power in those countries where it did not already possess it. The peasants, many of whom owned land, had attained an improved standard of living and education and wanted to get rid of the last vestiges of feudalism so as to acquire the full rights of landowners and to be free to increase their holdings. Furthermore, from about 1730, higher standards of living had reduced the mortality rate among adults considerably. This, together with other factors, had led to an increase in the population of Europe unprecedented for several centuries: it doubled between 1715 and 1800. For France, which with 26 million inhabitants in 1789 was the most populated country of Europe, the problem was most acute.

A larger population created a greater demand for food and consumer goods. The discovery of new gold mines in Brazil had led to a general rise in prices throughout the West from about 1730, indicating a prosperous economic situation. From about 1770, this trend slackened, and economic crises, provoking alarm and even revolt, became frequent. Arguments for social reform began to be advanced. The philosophes—intellectuals whose writings inspired these arguments—were certainly influenced by 17th-century theorists such as René Descartes, Benedict de Spinoza and John Locke, but they came to very different conclusions about political, social, and economic matters. A revolution seemed necessary to apply the ideas of Montesquieu, Voltaire, or Jean-Jacques Rousseau. This Enlightenment was spread among the educated classes by the many “societies of thought” that were founded at that time: masonic lodges, agricultural societies, and reading rooms.

It is uncertain, however, whether revolution would have come without the added presence of a political crisis. Faced with the heavy expenditure that the wars of the 18th century entailed, the rulers of Europe sought to raise money by taxing the nobles and clergy, who in most countries had hitherto been exempt, To justify this, the rulers likewise invoked the arguments of advanced thinkers by adopting the role of “enlightened despots.” This provoked reaction throughout Europe from the privileged bodies, diets. and estates. In North America this backlash caused the American Revolution, which began with the refusal to pay a tax imposed by the king of Great Britain. Monarchs tried to stop this reaction of the aristocracy, and both rulers and the privileged classes sought allies among the nonprivileged bourgeois and the peasants.

Although scholarly debate continues about the exact causes of the Revolution, the following reasons are commonly adduced: (1) the bourgeoisie resented its exclusion from political power and positions of honour; (2) the peasants were acutely aware of their situation and were less and less willing to support the anachronistic and burdensome feudal system; (3) the philosophes had been read more widely in France than anywhere else; (4) French participation in the American Revolution had driven the government to the brink of bankruptcy; (5) France was the most populous country in Europe, and crop failures in much of the country in 1788, coming on top of a long period of economic difficulties, compounded existing restlessness; and (6) the French monarchy, no longer seen as divinely ordained, was unable to adapt to the political and societal pressures that were being exerted on it. 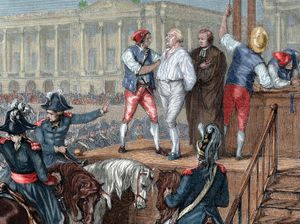