You are using an outdated browser. Please upgrade your browser to improve your experience and security.
{ "87186": { "url": "/place/Byzantine-Empire", "shareUrl": "http://www.mumt4.com/place/Byzantine-Empire", "title": "Byzantine Empire", "documentGroup": "TOPIC PAGINATED LARGE" ,"gaExtraDimensions": {"3":"false"} } }
Byzantine Empire
historical empire, Eurasia
Media
Print
Please select which sections you would like to print:
Thank you for your feedback

Byzantine Empire, the eastern half of the Roman Empire, which survived for a thousand years after the western half had crumbled into various feudal kingdoms and which finally fell to Ottoman Turkish onslaughts in 1453.

The very name Byzantine illustrates the misconceptions to which the empire’s history has often been subject, for its inhabitants would hardly have considered the term appropriate to themselves or to their state. Theirs was, in their view, none other than the Roman Empire, founded shortly before the beginning of the Christian era by God’s grace to unify his people in preparation for the coming of his Son. Proud of that Christian and Roman heritage, convinced that their earthly empire so nearly resembled the heavenly pattern that it could never change, they called themselves Romaioi, or Romans. Modern historians agree with them only in part. The term East Rome accurately described the political unit embracing the Eastern provinces of the old Roman Empire until 476, while there were yet two emperors. The same term may even be used until the last half of the 6th century, as long as men continued to act and think according to patterns not unlike those prevailing in an earlier Roman Empire. During those same centuries, nonetheless, there were changes so profound in their cumulative effect that after the 7th century state and society in the East differed markedly from their earlier forms. In an effort to recognize that distinction, historians traditionally have described the medieval empire as Byzantine.

The latter term is derived from the name Byzantium, borne by a colony of ancient Greek foundation on the European side of the Bosporus, midway between the Mediterranean and the Black Sea. The city was, by virtue of its location, a natural transit point between Europe and Asia Minor (Anatolia). Refounded as the “new Rome” by the emperor Constantine I in 330, it was endowed by him with the name Constantinople, the city of Constantine. The derivation from Byzantium is suggestive in that it emphasizes a central aspect of Byzantine civilization: the degree to which the empire’s administrative and intellectual life found a focus at Constantinople from 330 to 1453, the year of the city’s last and unsuccessful defense under the 11th (or 12th) Constantine. The circumstances of the last defense are suggestive too, for in 1453 the ancient, medieval, and modern worlds seemed briefly to meet. The last Constantine fell in defense of the new Rome built by the first Constantine. Walls that had held firm in the early Middle Ages against German, Hun, Avar, Slav, and Arab were breached finally by modern artillery, in the mysteries of which European technicians had instructed the most successful of the Central Asian invaders: the Ottoman Turks.

The fortunes of the empire were thus intimately entwined with those of peoples whose achievements and failures constitute the medieval history of both Europe and Asia. Nor did hostility always characterize the relations between Byzantines and those whom they considered “barbarian.” Even though the Byzantine intellectual firmly believed that civilization ended with the boundaries of his world, he opened it to the barbarian, provided that the latter (with his kin) would accept baptism and render loyalty to the emperor. Thanks to the settlements that resulted from such policies, many a name, seemingly Greek, disguises another of different origin: Slavic, perhaps, or Turkish. Barbarian illiteracy, in consequence, obscures the early generations of more than one family destined to rise to prominence in the empire’s military or civil service. Byzantium was a melting-pot society, characterized during its earlier centuries by a degree of social mobility that belies the stereotype, often applied to it, of an immobile caste-ridden society.

A source of strength in the early Middle Ages, Byzantium’s central geographical position served it ill after the 10th century. The conquests of that age presented new problems of organization and assimilation, and those the emperors had to confront at precisely the time when older questions of economic and social policy pressed for answers in a new and acute form. Satisfactory solutions were never found. Bitter ethnic and religious hostility marked the history of the empire’s later centuries, weakening Byzantium in the face of new enemies descending upon it from east and west. The empire finally collapsed when its administrative structures could no longer support the burden of leadership thrust upon it by military conquests.

The Roman and Christian background

Unity and diversity in the late Roman Empire

The Roman Empire, the ancestor of the Byzantine, remarkably blended unity and diversity, the former being by far the better known, since its constituents were the predominant features of Roman civilization. The common Latin language, the coinage, the “international” army of the Roman legions, the urban network, the law, and the Greco-Roman heritage of civic culture loomed largest among those bonds that Augustus and his successors hoped would bring unity and peace to a Mediterranean world exhausted by centuries of civil war. To strengthen those sinews of imperial civilization, the emperors hoped that a lively and spontaneous trade might develop between the several provinces. At the pinnacle of that world stood the emperor himself, the man of wisdom who would shelter the state from whatever mishaps fortune had darkly hidden. The emperor alone could provide that protection, since, as the embodiment of all the virtues, he possessed in perfection those qualities displayed only imperfectly by his individual subjects.

The Roman formula of combating fortune with reason and therewith ensuring unity throughout the Mediterranean world worked surprisingly well in view of the pressures for disunity that time was to multiply. Conquest had brought regions of diverse background under Roman rule. The Eastern provinces were ancient and populous centres of that urban life that for millennia had defined the character of Mediterranean civilization. The Western provinces had only lately entered upon their own course of urban development under the not-always-tender ministrations of their Roman masters.

Each of the aspects of unity enumerated above had its other side. Not everyone understood or spoke Latin. Paralleling and sometimes influencing Roman law were local customs and practices, understandably tenacious by reason of their antiquity. Pagan temples, Jewish synagogues, and Christian baptisteries attest to the range of organized religions with which the official forms of the Roman state, including those of emperor worship, could not always peacefully coexist. And far from unifying the Roman world, economic growth often created self-sufficient units in the several regions, provinces, or great estates.

Given the obstacles against which the masters of the Roman state struggled, it is altogether remarkable that Roman patriotism was ever more than an empty formula, that cultivated gentlemen from the Pillars of Hercules to the Black Sea were aware that they had “something” in common. That “something” might be defined as the Greco-Roman civic tradition in the widest sense of its institutional, intellectual, and emotional implications. Grateful for the conditions of peace that fostered it, men of wealth and culture dedicated their time and resources to glorifying that tradition through adornment of the cities that exemplified it and through education of the young who they hoped might perpetuate it.

Upon that world the barbarians descended after about 150 ce. To protect the frontier against them, warrior emperors devoted whatever energies they could spare from the constant struggle to reassert control over provinces where local regimes emerged. In view of the ensuing warfare, the widespread incidence of disease, and the rapid turnover among the occupants of the imperial throne, it would be easy to assume that little was left of either the traditional fabric of Greco-Roman society or the bureaucratic structure designed to support it.

Neither assumption is accurate. Devastation was haphazard, and some regions suffered while others did not. In fact, the economy and society of the empire as a whole during that period was the most diverse it had ever been. Impelled by necessity or lured by profit, people moved from province to province. Social disorder opened avenues to eminence and wealth that the more-stable order of an earlier age had closed to the talented and the ambitious. For personal and dynastic reasons, emperors favoured certain towns and provinces at the expense of others, and the erratic course of succession to the throne, coupled with a resulting constant change among the top administrative officials, largely deprived economic and social policies of recognizable consistency. 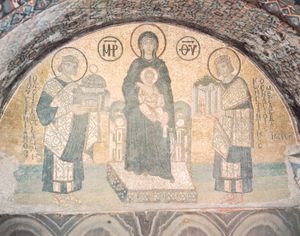