You are using an outdated browser. Please upgrade your browser to improve your experience and security.
{ "582972": { "url": "/topic/Daoism", "shareUrl": "http://www.mumt4.com/topic/Daoism", "title": "Daoism", "documentGroup": "TOPIC PAGINATED LARGE" ,"gaExtraDimensions": {"3":"false"} } }
Daoism
Chinese philosophy and religion
Media
Print
Please select which sections you would like to print:
Thank you for your feedback

Daoism, also spelled Taoism, indigenous religio-philosophical tradition that has shaped Chinese life for more than 2,000 years. In the broadest sense, a Daoist attitude toward life can be seen in the accepting and yielding, the joyful and carefree sides of the Chinese character, an attitude that offsets and complements the moral and duty-conscious, austere and purposeful character ascribed to Confucianism. Daoism is also characterized by a positive, active attitude toward the occult and the metaphysical (theories on the nature of reality), whereas the agnostic, pragmatic Confucian tradition considers these issues of only marginal importance, although the reality of such issues is, by most Confucians, not denied.

Daoism is a philosophy, a religion, and a way of life that arose in the 6th century BCE in what is now the eastern Chinese province of Henan. It has strongly influenced the culture and religious life of China and other East Asian countries ever since.

What does dao mean?

The term dao predates the rise of Daoism and is used in all schools of Chinese philosophy, including Confucianism. Its literal meanings include “way,” “path,” “road,” “course,” “speech,” and “method,” among others.

What are the basic teachings of Daoism?

The concept of dao is broad and plays various roles in Daoist philosophy. The Cosmic Dao, or the Way of the Cosmos, is an indeterminate force or principle that latently contains all things and spontaneously generates the universe through its constant rhythmic fluctuations. Humanity will flourish only if its dao, or “way,” is attuned with this natural order. The wise ruler or self-cultivated sage is so attuned to the Dao that his actions leave no traces of themselves and so pass completely unnoticed.

Who were the great teachers of Daoism?

The founding figure is Laozi, who flourished in the 6th century BCE but about whom little else is known. The Daodejing (“Classic of the Way to Power”), the earliest work of Daoist philosophy, is traditionally attributed to him but was probably composed after his death by many authors. Zhuangzi (“Master Zhuan”), who lived from 369 to 286 BCE, was a major interpreter of Daoism. His work, the Zhuangzi, partly composed by his disciples, is considered more comprehensive than the Daodejing.

How does Daoism differ from Confucianism?

Daoism and Confucianism present contrasting, though not incompatible, understandings of human flourishing or well-being. Whereas Daoism seeks harmony between the individual (or human) way and the natural order and tends to dismiss human society as artificial and constrained, Confucianism emphasizes the achievement of a kind of moral excellence (ren, or “humaneness”) that is cultivated and manifested by conscientious behaviour within social institutions such as the family, the school, the community, and the state.

Read more below: What is the Difference Between Daoism and Confucianism?

More strictly defined, Daoism includes: the ideas and attitudes peculiar to the Laozi (or Daodejing; “Classic of the Way of Power”), the Zhuangzi, the Liezi, and related writings; the Daoist religion, which is concerned with the ritual worship of the Dao; and those who identify themselves as Daoists.

Daoist thought permeates Chinese culture, including many aspects not usually considered Daoist. In Chinese religion, the Daoist tradition—often serving as a link between the Confucian tradition and folk tradition—has generally been more popular and spontaneous than the official (Confucian) state cult and less diffuse and shapeless than folk religion.

Daoist philosophy and religion have found their way into all Asian cultures influenced by China, especially those of Vietnam, Japan, and Korea. Various religious practices reminiscent of Daoism in such areas of Chinese cultural influence indicate early contacts with Chinese travelers and immigrants that have yet to be elucidated.

Both Western Sinologists and Chinese scholars themselves have distinguished—since Han times (206 bce–220 ce)—between a Daoist philosophy of the great mystics and their commentators (daojia) and a later Daoist religion (daojiao). This theory—no longer considered valid—was based on the view that the “ancient Daoism” of the mystics antedated the “later Neo-Daoist superstitions” that were misinterpretations of the mystics’ metaphorical images. The mystics, however, should be viewed against the background of the religious practices existing in their own times. Their ecstasies, for example, were closely related to the trances and spirit journeys of the early magicians and shamans (religious personages with healing and psychic transformation powers). Not only are the authors of the Daodejing, the Zhuangzi (book of “Master Chuang”), and the Liezi (book of “Master Lie”) not the actual and central founders of an earlier “pure” Daoism later degraded into superstitious practices but they can even be considered somewhat on the margin of older Daoist traditions. Therefore, because there has been a nearly continuous mutual influence between Daoists of different social classes—philosophers, ascetics, alchemists, and the priests of popular cults—the distinction between philosophical and religious Daoism in this article is made simply for the sake of descriptive convenience.

There is also a tendency among scholars today to draw a less rigid line between what is called Daoist and what is called Confucian. The two traditions share many of the same ideas about man, society, the ruler, heaven, and the universe—ideas that were not created by either school but that stem from a tradition prior to either Confucius or Laozi.

Viewed from this common tradition, orthodox Confucianism limited its field of interest to the creation of a moral and political system that fashioned society and the Chinese empire; whereas Daoism, inside the same worldview, represented more personal and metaphysical preoccupations.

In the case of Buddhism—a third tradition that influenced China—fundamental concepts such as the nonexistence of the individual ego and the illusory nature of the physical world are diametrically opposed to Daoism. In terms of overt individual and collective practices, however, competition between these two religions for influence among the people—a competition in which Confucianism had no need to participate because it had state patronage—resulted in mutual borrowings, numerous superficial similarities, and essentially Chinese developments inside Buddhism, such as the Chan (Japanese Zen) sect. In folk religion, since Song times (960–1279), Daoist and Buddhist elements have coexisted without clear distinctions in the minds of the worshippers. 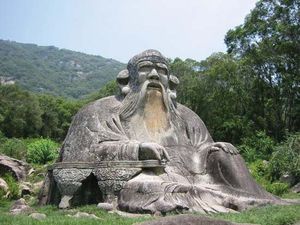