Impeachment, in common law, a criminal proceeding instituted against a public official by a legislative body. In Great Britain the House of Commons serves as prosecutor and the House of Lords as judge in an impeachment proceeding. In the federal government of the United States, the House of Representatives institutes impeachment proceedings by authorizing a formal inquiry by the House Judiciary Committee, which may then recommend articles of impeachment (an impeachment resolution) for a vote by the full House (articles of impeachment may also be introduced in the House without a formal inquiry). If the articles are approved, a trial is held in the Senate, and conviction is obtained by a vote of at least two-thirds of the senators present. In Great Britain conviction on an impeachment has resulted in fine and imprisonment and even in execution, whereas in the United States the penalties extend no further than removal and disqualification from office.

In England impeachment originated in the 14th century, when it became a means of initiating criminal proceedings based on “clamour,” or outcry. The Good Parliament of 1376 produced the first recognized cases of impeachment, the most important being that of William, 4th Baron Latimer, who had been closely associated with the government of Edward III. Subsequent subjects of impeachment have often been political figures, usually royal ministers. Latimer’s case also marks the point at which impeachment became not merely a means of initiating criminal proceedings but also a method of trial.

After the mid-15th century, impeachment fell out of use until the 17th century, when it was revived as a means by which Parliament could get rid of unpopular ministers, usually court favourites protected by the king. From 1621 until 1679, many of the chief officers of the crown were brought down or at least jeopardized by this powerful parliamentary weapon, among them the 1st duke of Buckingham (1626), the earl of Strafford (1640), Archbishop William Laud (1642), the earl of Clarendon (1667), and Thomas Osborne, earl of Danby (1678). In the last case it was decided that the king’s pardon could not stop an impeachment against his minister.

The use of impeachment gradually waned as the 18th century progressed, mainly because it proved too blunt a political instrument by which to attack the king’s ministers. The proceeding’s limitations were clearly evident in the unsuccessful impeachment trial (1788–95) of Warren Hastings. In the early 19th century the acceptance of the principle that cabinet ministers are responsible to Parliament (rather than to the sovereign) made impeachment unnecessary, and the procedure fell into disuse after the unsuccessful trial of Lord Melville in 1806.

In the United States the impeachment process has rarely been employed, largely because it is so cumbersome. It can occupy Congress for a lengthy period of time, fill thousands of pages of testimony, and involve conflicting and troublesome political pressures. Repeated attempts in the U.S. Congress to amend the procedure, however, have been unsuccessful, partly because impeachment is regarded as an integral part of the system of checks and balances in the U.S. government.

Andrew Johnson was the first U.S. president to be impeached. In 1868 he was charged with attempting to remove, contrary to statute, the secretary of war, Edwin M. Stanton, with inducing a general of the army to violate an act of Congress, and with contempt of Congress. Johnson was acquitted by a margin of a single vote. In 1974 the Judiciary Committee of the House of Representatives voted three articles of impeachment against Pres. Richard M. Nixon, but he resigned before impeachment proceedings in the full House could begin. In December 1998 the House of Representatives voted to impeach Pres. Bill Clinton, charging him with perjury and obstruction of justice in investigations of his relationship with a White House intern, Monica Lewinsky. In the trial, the Senate voted not guilty on the perjury charge (55–45) and not guilty on the obstruction of justice charge (50–50); since 67 guilty votes are needed for a conviction, President Clinton was acquitted.

Every U.S. state except Oregon provides for the removal of executive and judicial officers by impeachment. Exact procedures vary somewhat from state to state, but they are all similar to federal impeachment.

The Editors of Encyclopaedia Britannica This article was most recently revised and updated by Brian Duignan. 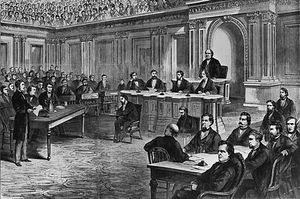